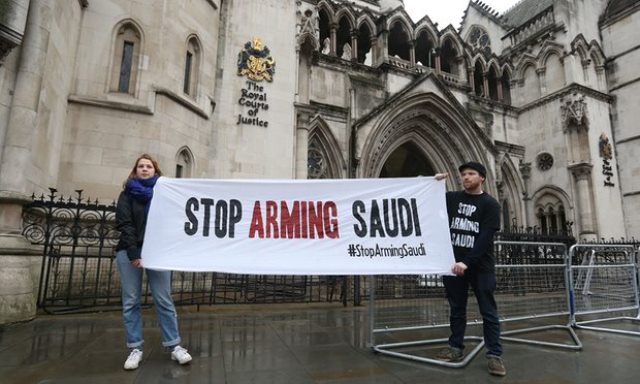 17/02/2017 1:41 م
The View from the Crusaders' Castle
What is Wahhabism? The reactionary branch of Islam from Saudi Arabia said to be ‘the main source of global terrorism’
Brazil’s Bolsonaro Asked Biden for Re-Election Help Against Lula

At the outset, at least, the Arab spring was a moment of great hope. The series of popular uprisings against repressive regimes that swept across the Middle East in 2011 seemed to promise a new, democratic beginning. From Tunisia to Libya and Egypt, abusive dictators such as Muammar Gaddafi and Hosni Mubarak were overthrown. But the internecine power struggles that ensued, and the violent chaos that accompanied them, soon eclipsed hopes of a better future. For millions of Arabs, the revolts ultimately came down to a choice between ceaseless civil war or renewed dictatorship. Syria, that most unfortunate of lands, got both.

As if this sequence of events were not disheartening enough, how dismaying it is to learn that Britain, which continues, against much contrary evidence, to preen itself as a shining beacon of representative governance and liberal values, has profited greatly, and continues to profit, from this dashing of democratic aspirations. As Jamie Doward reports today, the impact of the Arab spring produced a bonanza for UK arms manufacturers and exporters. In the years preceding 2011, Britain, on average, sold £41.3m worth of small arms, £7m worth of ammunition and £34.3m worth of armoured vehicles to Middle East and North African governments. In the five years that followed, annual sales rose to an average of £58.9m, £14m and £59.6m respectively.

In Egypt, where the elected, post-Mubarak government was overthrown in a bloody military coup, the average yearly value of British exports of small arms, ammunition and armoured vehicles jumped from £2.5m to £34.7m after 2011. Two-thirds of all British arms exports go to the Middle East. In the past two years, the UK has agreed arms deals worth £388m with the United Arab Emirates, £170m with Qatar, £120m with Oman and £24m with Bahrain, according to the non-governmental Campaign Against the Arms Trade (CAAT).

Among all these eager, weapons-hungry regimes, anxious to shore up their often illegitimate and undemocratic grip on power, Saudi Arabia is the jewel in the crown for Britain’s arms merchants. Official HMRC figures, analysed by the Greenpeace EnergyDesk, show that in 2015, 83% of UK arms exports – almost £900m worth – went to Saudi Arabia. Even more significantly perhaps, given the furious controversy over the Saudi-led military campaign in Yemen, ministers have granted export licences for more than £3.3bn worth of aircraft, munitions and other equipment to Riyadh since 2015, when the Saudi intervention began.

Yemen was one of the Arab spring’s biggest casualties. The forced resignation and replacement of its long-standing dictator in 2012 proved the trigger for an expanding civil war that has drawn in both Iran and Saudi Arabia at the head of a Gulf Arab coalition. Yet rather than draw on its experience as the former colonial power in Aden and energetically work to end the conflict, Britain has largely sat on the diplomatic sidelines, while avidly aiding and abetting Saudi Arabia’s often indiscriminate and possibly illegal military operations. The subsequent, ongoing violence and alleged, egregious abuses of international humanitarian law (IHL) – some deliberate, some accidental, exemplified by last October’s bombing of a funeral that killed 140 people – are, in part, the consequence of the British government’s selfish, complacent and irresponsible behaviour.

Yemen, always poor and unstable, has become, as a result of this myopic neglect and shaming self-interest, a disaster zone where the UN estimates 12 million people are on the brink of famine. Roughly two-thirds of the population is now in need of humanitarian assistance, yet global appeals are persistently underfunded. In Yemen, the terrorist groups feared by Britain and its allies, such as al-Qaida in the Arabian Peninsula, feed on the injustices engendered by the Saudi campaign. In Yemen, Donald Trump orders a specious special operations raid that goes predictably and disastrously wrong. In Yemen, one child is dying every 10 minutes. Nearly half a million suffer acute malnutrition.

British policy is nothing if not consistent. Instead of seeing the Arab uprisings as a golden opportunity to remake what the UN has deemed one of the world’s most undeveloped regions, the Foreign Office, the Ministry of Defence, the Department for International Trade and Downing Street have focused narrowly on British commercial advantage, with Yemen being the worst example. It is true, or so David Cameron says, that Saudi Arabia provides Britain with counter-terrorism intelligence. It is true it is an important oil supplier and that many jobs rely on arms sales. It is also true that Whitehall shares Riyadh’s fear of Iran’s regional ambitions. But as indicated by last week’s court hearings on the legality of continued Saudi arms sales, initiated by CAAT, the biggest, ugliest “truth” underlying British officialdom’s infatuation with the Saudis is as banal as it is immoral: money.

The court heard how minister after minister, with Boris Johnson, the foreign secretary, to the inglorious fore, passed the ethical buck, fretting over advice that arms sales were illegal under IHL and Britain’s treaty obligations, wondering how to circumvent their obligations, appealing to each other for political cover and ultimately deciding, in the teeth of evidence provided by the UN, two parliamentary committees and activist groups such as Human Rights Watch, that the lucrative sales should continue, whatever the cost to Yemeni civilians. No matter, apparently, that the MoD’s arrangements for monitoring Saudi operations, and the Saudis’ own record-keeping, were woefully inadequate. No matter, apparently, that opinion polls show almost two-thirds of the British public believes selling arms to Saudi Arabia is unacceptable. The government’s bottom line was unchanged. It is all about hard cash.

Let us be plain. Britain should not be selling weaponry and equipment of any kind to Saudi Arabia or to any other undemocratic and autocratic regime that is likely to use such materiel in breach of international law and the universal human rights that Britain supposedly upholds. Britain should tell its Saudi ally that its military campaign in Yemen must be halted. Johnson should cease his hypocritical hand-wringing about proxy wars and do what a diplomat is paid to do – secure a Yemen settlement. And as we have said before, Theresa May should order a top-to-bottom review of Britain’s relationship with Saudi Arabia, whose encouragement of religious extremism and intolerance, lack of respect for human and women’s rights and use of judicial executions run contrary to British interests and values. And if our prime minister thinks British people value arms sales to a Turkish autocrat above respect for human life, she will soon discover her error. It is not about money. It is about our common humanity.

Our Precarious American Democracy Extreme Polarization and Alienation in Our Politics

Not found any comments