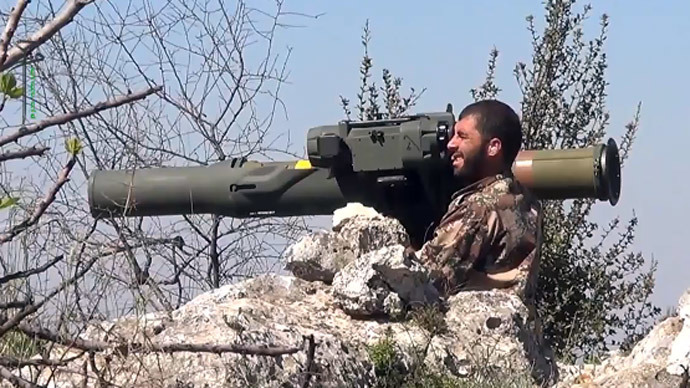 Why Did America Switch Sides

America fought the Nazis in World War II and Al Qaeda since 2001. But – as hard as it is to believe – our government has now switched sides. William Blum writes:

In Libya, in Syria, and elsewhere the United States has been on the same side as the al-Qaeda types….

In Ukraine the United States is on the same side as the neo-Nazi types, who – taking time off from parading around with their swastika-like symbols and calling for the death of Jews, Russians and Communists – on May 2 burned down a trade-union building in Odessa, killing scores of people and sending hundreds to hospital; many of the victims were beaten or shot when they tried to flee the flames and smoke; ambulances were blocked from reaching the wounded. Try and find an American mainstream media entity that has made a serious attempt to capture the horror.

[Obama] partners with jihadists and Nazis and has waged war against seven nations.

The U.S. “switched sides” to arm and support Al Qaeda in Libya, so they would topple Gaddaffi. This misguided effort actually created a terrorist safe haven in Libya.

The same thing happened in Syria. The Syrian rebels are mainly Al Qaeda, and the U.S. has been supporting these terrorists for years. Indeed, as reported in the Wall Street Journal, the National and other sources, Al Qaeda’s power within the Syrian rebel forces is only growing stronger.

Said: “When we finish with Assad, we will fight the U.S.!”

Said: “We started our holy war here and won’t finish until this [Al Qaeda] banner will be raised on top of the White House. Keep funding them, you always do that, remember? Al Qaeda for instance.”

In fact, the head of the Syrian rebels is also the global boss of Al Qaeda … and he is calling for fresh terrorist attacks on America. CBS News reports:

Al Qaeda chief Ayman al-Zawahri called has called on Muslims to continue attacking Americans on their own soil in order to “bleed” the U.S. economy.

“To keep up the hemorrhage in America’s security and military spending, we need to keep the Unites States on a constant state of alert about where and when the next strike will blow,” Zawahiri said.

Reuters noted in February 2012 that al-Zawahri is backing the Syrian rebels, and asking his followers to fight the Syrian government. But al-Zawahri has since taken control of the main Al Qaeda rebel terrorist group in Syria: al-Nusra.

A recent illustration of the fractured nature of the al-Qaeda network was provided during the spring of 2013 when Zawahiri [the global head of Al Qaeda] personally intervened to settle a dispute between Jabhat al-Nusra and al-Qaeda in Iraq (AQI). Zawahiri rejected AQI’s assertion of control over al-Nusra and declared the Syrian group to be under his direction.

In doing so, Zawahiri was trying to assert control over two of al-Qaeda’s most virulent affiliates. AQI had mounted a series of spectacular attacks in Iraq over the past year, demonstrating that it was a force to be reckoned with. According to the Congressional Research Service, there were some dozen days in 2012 in which AQI carried out simultaneous multicity attacks that killed hundreds of Iraqis. And the al-Qaeda affiliate in Syria is widely acknowledged as the most effective fighting force in the war against Bashar al-Assad’s regime.

But we are supporting these murderers. Indeed, Obama signed a special exemption to the law barring arming of terrorists.

We’re now shipping heavy weapons to the rebels such as anti-tank (“TOW” missiles) and possibly even anti-aircraft weapons
http://img.rt.com/files/news/24/d8/90/00/38.si.jpg
Screenshot from Youtube video showing Syrian rebel using a TOW provided by the U.S.

Let’s recap … Most of the Syrian “rebels” are Al Qaeda. The U.S. government has designated these guys as terrorists. Things are getting worse, not better: Al Qaeda is gaining more and more power among the rebels. The U.S., Saudi Arabia, Qatar and Israel have been backing these guys for years. Indeed, we’ve long known that most of the weapons we’re shipping to Syria are ending up in the hands of Al Qaeda. And they apparently have chemical weapons.

Summary: We’re arming the same guys who are threatening to blow us up.
Backing Nazis

The U.S. is backing neo-Nazis in Ukraine (and see this).

These savages have already committed mass murder in broad daylight … on camera while being filmed.

The leader of the “protests” in February 2014 which ousted the president of Ukraine (Andriy Parubiy) is a neo Nazi and follower of a prominent WWII Ukrainian Nazi.

He’s now the head of national security in Ukraine. In that role, he has organized neo-Nazi brigades to murder Russian-speaking Ukrainians en masse.

As resistance to Kiev’s right-wing regime expanded in the ethnic Russian east and south, the coup regime found itself unable to count on regular Ukrainian troops to fire on civilians. Thus, its national security chief Andriy Parubiy, himself a neo-Nazi, turned to the intensely motivated neo-Nazi shock troops who had been battle-tested during the coup.

These extremists were reorganized as special units of the National Guard and dispatched to the east and south to do the dirty work that the regular Ukrainian military was unwilling to do. Many of these extreme Ukrainian nationalists lionize World War II Nazi collaborator Stepan Bandera and – like Bandera – dream of a racially pure Ukraine, free of Jews, ethnic Russians and other “inferior” beings. The slur of calling the Odessa protesters Colorado beetles — as they were being burned alive — was a reference to the black-and-red colors used by the ethnic Russian resistance in the east.

Though the mainstream U.S. press either describes Parubiy simply as the interim government’s chief of national security (with no further context) or possibly as a “nationalist,” his fuller background includes his founding of the Social-National Party of Ukraine in 1991, blending radical Ukrainian nationalism with neo-Nazi symbols. Last year, he became commandant of the Maidan’s “self-defense forces.”

Then, on April 15, after becoming the Kiev regime’s chief of national security and finding Ukrainian troops unwilling to fire on fellow Ukrainians in the east, Parubiy went on Twitter to announce, “Reserve unit of National Guard formed #Maidan Self-defense volunteers was sent to the front line this morning.”

Those National Guard forces also were reported on the ground in Odessa when the trade unions building was torched on May 2 and they showed up again in Mariupol as the police station was burned on May 9, according to a report in the New York Times on Saturday.

The neo-Nazis – under the control of Parubiy and the other Nazi-wannabes in the new Ukrainian government – have now twice committed mass murder by setting fire to buildings where Russian speakers were trying to take cover.

In Ukraine, a grisly new strategy – bringing in neo-Nazi paramilitary forces to set fire to occupied buildings in the country’s rebellious southeast – appears to be emerging as a favored tactic as the coup-installed regime in Kiev seeks to put down resistance from ethnic Russians and other opponents.

The technique first emerged on May 2 in the port city of Odessa when pro-regime militants chased dissidents into the Trade Unions Building and then set it on fire. As some 40 or more ethnic Russians were burned alive or died of smoke inhalation, the crowd outside mocked them as red-and-black Colorado potato beetles, with the chant of “Burn, Colorado, burn.” Afterwards, reporters spotted graffiti on the building’s walls containing Swastika-like symbols and honoring the “Galician SS,” the Ukrainian adjunct to the German SS in World War II.

This tactic of torching an occupied building occurred again on May 9 in Mariupol, another port city, as neo-Nazi paramilitaries – organized now as the regime’s “National Guard” – were dispatched to a police station that had been seized by dissidents, possibly including police officers who rejected a new Kiev-appointed chief. Again, the deployment of the “National Guard” was followed by burning the building and killing a significant but still-undetermined number of people inside. (Early estimates of the dead range from seven to 20.)

Other representative incidents include the Kiev-appointed governor of the Southern Ukraine region of Kheron praising Hitler as a liberator – and neo-Nazis harassing Russian World War II veterans as they sat on a bus – all on Russia’s annual day of celebrating victory over the Nazis.

Some Ukrainian police are disgusted with the brutality. As Parry notes:

The [New York] Times added … Residents who had gathered around the police station offered an account that differed from the interior minister’s. The city police, they said, were sympathetic to the pro-Russian side and had mutinied against an out-of-town chief newly installed by the interim government in Kiev.

“Armored vehicles had driven into the city to confront the rebellious police….

The Kiev’s regime’s concern that some local police forces have at best mixed loyalties has led it again to turn to the Maidan “self-defense” forces to serve as a special “Kiev-1” police force, which was dispatched to Odessa amid that city’s recent violence.

In other words, the new Ukrainian government is sending in neo-Nazi brigades to do the hatchet work that the local police refuse to carry out.

And yet the U.S. is heavily supporting these thugs. Once again, America has switched sides … from fighting Nazis in World War II to backing them today.
Why Are We Backing the Bad Guys More than the Good Guys?

True, our government has backed Islamic terrorists and Nazis before.

But it has now gotten so out of hand that we seem to be backing the bad guys much more than the good guys.

Though many Americans don’t want to believe that their government would collaborate with neo-Nazis or other extremist elements, there actually has been a long history of just that.

In Central American conflicts that I covered for the Associated Press and Newsweek in the 1980s, some of the “death squads” associated with pro-U.S. regimes were drawn from neo-fascist movements allied with the far-right World Anti-Communist League.

The key to all these unsavory alliances is for the American people not to know about the real nature of these U.S. clients. In the 1980s, the Reagan administration advanced the concept of “public diplomacy” to intimidate journalists and human rights activists who dared report on the brutality of U.S.-backed forces in El Salvador and Guatemala and the CIA-trained Contra rebels in Nicaragua.

Thus, most Americans weren’t sure what to make of recurring reports about right-wing “death squads” killing priests and nuns and committing other massacres across Central America.

So, it should come as no surprise that the Kiev regime would turn to its Maidan “self-defense” forces – formed around neo-Nazi militias – to go into southern and eastern Ukraine with the purpose of burning to death ethnic Russian “insects” occupying buildings. The key is not to let the American people in on the secret.

Sadly, experts on both the left and the right agree that the U.S. has now become the world’s largest sponsor of terrorism.