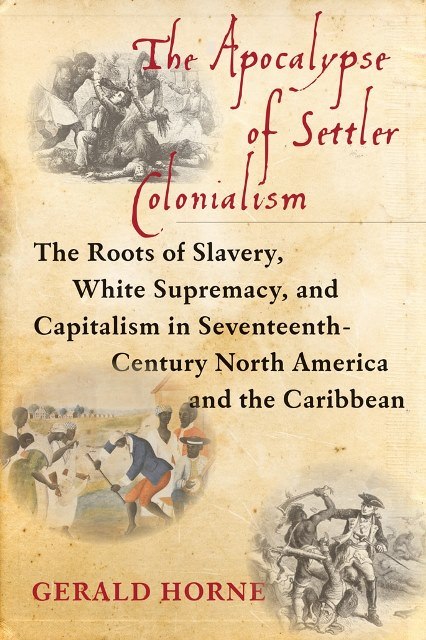 Slavery played out on global scale: Journal of Colonialism and Colonial History reviews “The Apocalypse of Settler Colonialism”

06/06/2019 6:12 م
Ideological Crisis of Western Capitalism
Globalization And Decline Of The West: Eurasianism, The State And Rebirth Of Ethnic-Socialism
Did Saudi Arabia Just Try To Give the West Bank to Israel?

In The Apocalypse of Settler Colonialism, Gerald Horne weaves together a century of events and processes to demonstrate the depth to which colonial systems of slavery and settler colonialism, which significantly accelerated in the seventeenth century, influenced the foundation of the United States. In his introduction, Horne states he is attempting to persuade readers that “any explanation [of how the US is a global dominant power] that elides slavery, colonialism, and the shards of an emerging capitalism… is deficient in explanatory power” (7). He successfully accomplishes this argument through framing the rise of slavery and its direct connection to capitalism through cross-class alliances, which congealed pan-Europeanism and the dominative identity of whiteness that has endured to the present day. These events, atop land that was violently seized from groups indigenous to North America and built upon the backs of people enslaved in the Caribbean and the mainland, were all veiled under the quest for democracy and religious freedom, which fundamentally set the stage for the revolution of 1776.

Organizing The Apocalypse chronologically is a logical choice, as Horne is a historian and is synthesizing archival documents, primary sources and a whole host of scholars’ analysis on subjects pertaining to the history of slavery in the Caribbean and the mainland of what is the modern-day US. These sources were integral to viewing his object of study and were utilized to bolster his claim that it is inadequate to consider the US as a self-made world power without grasping the historical events of slavery, capitalism and White supremacy in the seventeenth century. However, employing an extensive scope of sources to serve as supporting evidence results in quite a detail-driven narrative. Encompassing the wide breadth of multiple European empires and multifaceted processes like slavery and settler colonialism over the course of a century in less than two hundred pages is an ambitious task that might overwhelm introductory students. But these details help Horne succeed in both relaying these events and explicitly offering opportunity to apply these histories to the current US landscape; thus, the meticulous details throughout the book should not overshadow what this monograph achieves.

In fact, Horne integrates his themes of how “enslaving colonialism forged ‘whiteness'” (22) and how this process increased early migration to the US quite clearly throughout the nine chapters of The Apocalypse. The study of whiteness has captured the attention of scholars since W.E.B. Du Bois, but Horne provides a fresh analysis as he contextualizes whiteness as an emerging pan-Europeanism that resulted from intensified African labor during the seventeenth century. Throughout each chapter, Horne integrates this sub-theme of how the political identity of whiteness formed through the colonizing events of those in power—European nations—pawning off, placing and implementing differently marked bodies to different locations and for different labor for the profits of capitalism.

Horne intertwines slavery, capitalism and White supremacy most clearly in Chapters Four, Five and Six. These chapters outline pivotal moments on the world stage and events thereafter that altered the construction of the US—the disintegration of both the Spanish and Dutch empires and the formation of the Royal African Company. Horne effectively weaves together how these events contributed to the rise of England’s imperial dominance and the tightening of their grasp on slavery. Factors in conjunction with one another like London’s stake in the Royal African Company, rising capitalist demands for increased labor, the sugar boom and intensified fear of additional slave revolts caused more enslaved Africans to be forced into labor, inversely decreasing poor indentured European labor. This all began to constitute the soon to be pervasive identity politics of whiteness cemented into the foundation of the US.

While the project of deconstructing American exceptionalism has been undertaken before by scholars in fields such as African American studies, Slavery studies, American history studies, Caribbean history studies and more, Horne uniquely supplies an in-depth historical narrative of how the multi-processes of slavery and settler colonialism in the early U.S. played out on a global scale, explicitly applying this history to a post-2016-election US. However, the book may not meet the expectations of American studies, Ethnic studies, Settler Colonialism studies and Indigenous studies scholars. Seeing the title The Apocalypse of Settler Colonialism, readers might presume that settler colonialism, and thus Indigenous groups, will be at the forefront of the analysis or at the least be given equal analytical weight to enslaved Africans. But this expectation is unmet, as the structure of slavery is privileged much more than settler colonialism. Maintaining the duality of slavery and settler colonialism is a difficult task for most scholars who deliberately attempt to theoretically balance these two groups, but given Horne’s argument, the archival sources used and the discipline he is situated in, it is reasonable that he gave more weight to slavery than settler colonialism.

Although my personal expectations about the analysis of Indigenous people to North America in direct correlation to settler colonialism were not met, this book still powerfully threads together important histories that undoubtedly shed innovative light on what led to the events of 1776 and the self-imposed global dominance the US has held with pride ever since. Horne’s book not only provides a rigorously detailed synthesis of the past formation of North America but also offers a new understanding of the interrelated transnational processes of capitalism, slavery and White supremacy that unequivocally applies to the current political landscape of the US. The Apocalypse of Settler Colonialism is a vital text to be read and taught in classrooms seeking to disrupt progress narratives and reject US exceptionalism, particularly for high-level students who seek detailed synthesized histories of colonial processes and how they formed what is the present-day US.

The Apocalypse of Settler Colonialism: The Roots of Slavery, White Supremacy, and Capitalism in Seventeenth-Century North America and the Caribbean
260 pp, $25 pbk, ISBN: 978-1-58367-663-9
By Gerald Horne

Not found any comments