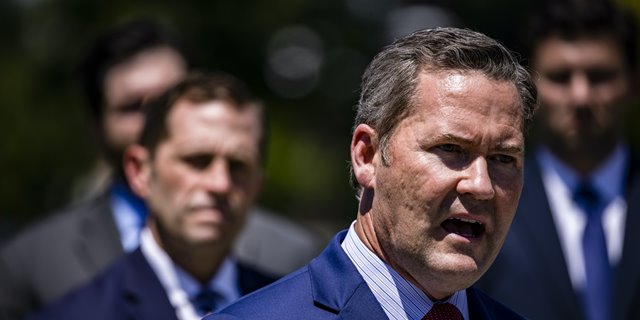 Florida Republican Michael Waltz made up to $25 million from the sale of Metis Solutions, a defense contractor with a spotty record training Afghan security forces.

FEW LAWMAKERS ARE as outspoken about the end of the war in Afghanistan as Michael Waltz, a Republican from Florida’s 6th Congressional District.

In recent weeks, Waltz has called on President Joe Biden to “reverse course,” relaunch military operations in the region, and “crush the Taliban offensive by committing American air power” supported by “special forces.” The Florida congressman has warned darkly of an “Al-Qaeda 3.0” and stated that no negotiations should take place with the Taliban “until the situation is stabilized militarily.”

Leading this push, in the pages of newspapers, over talk radio, and on cable television, Waltz couches his advocacy in his identity and experience. Not only is he a sitting memer of Congress, but he is a former Green Beret, a former aide to Dick Cheney, and “a father … sickened by what’s to come for the Afghan women and girls that are being mercilessly abused by the Taliban and sold into sex slavery,” as he wrote in opinion column published last week in Fox News.

There’s one crucial part of Waltz’s experience he tends to leave out: Before his successful run for Congress in 2018, he managed a lucrative defense contracting firm with offices in Afghanistan. The company was recently sold to Pacific Architects and Engineers, or PAE, one of the largest war contractors the U.S. has hired to train and mentor Afghan security forces. The deal personally enriched Waltz by up to $26 million, a figure made public by a filing disclosed this month.

In 2010, after stints in the military and as an adviser to the Bush administration, Waltz helped found Metis Solutions, a defense contractor that “provides strategic analysis, intelligence support, and training,” with offices in Arlington, Virgina; Tampa, Florida; Abu Dhabi, United Arab Emirates; and Kabul, Afghanistan. The company grew rapidly to 400 employees.

Led in part by Waltz, the company won coveted contracts to train special forces in Afghanistan, including a controversial program to develop artisanal mining operations in strategic villages.

“Congressman Waltz is a highly decorated army officer who served his country in uniform for the last 25 years that included combat tours in Afghanistan where he took the fight directly to the Taliban alongside Afghan forces,” said a Waltz spokesperson in a statement to The Intercept. “Additionally, he served in civilian positions where he frequently traveled to Afghanistan at his own risk to assist in building the capacity of the Afghan government and business sectors.”

Metis Solutions continued to grow even after Waltz stepped down to serve in Congress. In July 2020, shortly before its acquisition by PAE, Metis Solutions was awarded a $26 million contract from the military on “counter threat finance.” The announcement of the award noted that the work would be conducted in Afghanistan and the U.S.

Congressional ethics disclosures show that in 2019, Waltz held up to $1 million in equity from Metis Solutions and up to $250,000 in options of Metis Solutions stock. In November 2020, PAE announced that the company was acquiring Metis Solutions in an all-cash deal worth $92 million with the self-proclaimed goal to increase its foothold in the intelligence, analysis, and training space serving government clients. The lawmaker’s subsequent ethics disclosure, filed last week, shows that he earned between $5 and $25 million in capital gains from his stock sales, in addition to up to $1 million from exercising his options.

For Waltz, the timing was impeccable. The sale occurred just before the formal announcement by both Donald Trump and Biden to finally end the war in Afghanistan. PAE’s stock is now down nearly 20 percent since last year, with the greatest drop in value occurring over the last month. The company has been reported as among the most harmed by the decision to draw down forces in Afghanistan.

Waltz is “proud to have helped build a company that employs hundreds and provided advisory support to the U.S. military and Afghan government,” his spokesperson wrote to The Intercept. “This in no way disputes the recklessness of the Biden Administration’s withdrawal. Congressman Waltz is in full compliance with his obligations as approved by the House Ethics Committee with Democrats in the majority.”

PAE is the fourth largest defense contractor active in Afghanistan since fiscal year 2016. Over that period, the company accumulated contracts in Afghanistan worth more than $930 million, largely for the training and mentoring of Afghan security forces. It currently holds the primary contract for securing the U.S. Embassy in Kabul.

FOR PAE, these great financial gains from war come despite allegations of waste and failure.

In 2015, PAE paid $1.45 million to settle a whistleblower fraud case claiming that the company set up a big-rigging scheme to defraud the U.S. government over uniforms intended for the Afghan military. Two years later, the company paid another settlement, this time for $5 million, over claims that the firm submitted false invoices and defrauded the government over its work mentoring counter-narcotics police in Afghanistan.

Metis Solutions’ work in Afghanistan included a foray into the controversial area of mineral extraction. In 2012, the firm released a statement touting its work with the Afghan government developing agribusiness, construction, and mining. “We are very excited to begin this important work,” said Waltz in a press release. “Together with our Afghan partners and the Department of Commerce, METIS will make this program an instrumental next step in developing Afghan businesses for sustainable growth.”

Part of the work developing mining solutions came from the Afghan Business Development program, funded through USAID, which provided $1.8 million to Metis Solutions.

Another part of the mining development work was funded through the Pentagon’s “Task Force for Business and Stability Operations initiative,” an effort that was reportedly rife with fraud. The Special Inspector General for Afghanistan, known as SIGAR, reported that Metis Solutions was tapped by the TFBSO to “provide an artisanal mining expert to train both special forces personnel and local partners in proper artisanal mining methods and supporting Combined Joint Special Operations Task Force–Afghanistan Village Stability Operations by identifying potential small scale mineral development in strategic villages.”

But the projects never got off the ground. Another SIGAR audit report found that Metis Solutions was one of several contractors awarded TFBSO work that “met few to none of their contract deliverables.” The report noted that “these contract deliverables were not met because of a combination of inadequate planning by TFBSO, weak definition of contract requirements, lack of oversight by TFBSO of its contractors, changing circumstances in Afghanistan, and changing priorities of the Afghan government.”

In particular, the auditors flagged that Metis Solutions was forced to terminate its contract in less than five weeks over timeframe concerns and a bidding dispute. The report did not blame Metis Solutions for the failure and noted that “because of unforeseen obstacles, it may have avoided the waste of $83,861 had it not rushed Metis contractors to deploy to Afghanistan before the protest could be resolved.”

Wasted dollars and failed projects are perhaps among the most defining aspects of the American-led occupation of Afghanistan, which is estimated to have cost more than $2 trillion over its 20 years. SIGAR audits have identified countless examples of mind-boggling forms of fraud and waste worth hundreds of billions of dollars, including $70 million embezzled from a trucking company, $1.6 million on a water-filtration system that failed after only two months, and $50 billion on mine-resistant vehicles that were scrapped as unnecessary.

The police forces trained by PAE and other defense contractors have declined in quality in recent years, and they quickly abandoned their posts as the Taliban approached over the last month. The failure should come as no surprise.

Auditors found that Kabul residents experienced skyrocketing crime in 2020, with violence unfolding in previously safe neighborhoods. Gallup polling has indicated that the failure to protect the Afghan public from petty criminals and organized crime was a central concern for residents in 2019, before the Taliban’s recent return to power. At the same time, there were rampant reports of police corruption, with Afghan police involved in extortion schemes and checkpoint robberies of residents.

The extractive industry has been similarly scarred with grift and false hope. Afghanistan’s recently deposed President Ashraf Ghani has faced criticism over his personal family ties to artisanal mining contracts, allegedly concealed from the public during his time in office. The industry has faced pervasive corruption, as well as health and safety issues, and few stable job prospects for Afghan residents.

Waltz’s fervor for protecting the Afghan people ignores years of government reports showing an abysmal record of U.S. nation-building efforts. The U.S.-launched war has resulted in the deaths of 47,245 civilians, over 66,000 Afghan police and military, widespread torture, and the empowerment of warlords and criminal gangs that have unraveled life for most Afghans.

Even the mixed gains for women’s rights in Afghanistan have faded under U.S. occupation. SIGAR has shown that female participation in Afghan elections declined dramatically since 2014, and many of the U.S.-backed gender equality efforts have been poorly designed and implemented, with little local support. As several independent investigative reports have found, the U.S. has falsified women’s enrollment in education programs and misled on other development benchmarks.

Waltz, though, is undeterred, and has said America’s 20-yearlong engagement in Afghanistan is only the beginning.

“We are in a multi-decade war and we are only 15-years in,” said Waltz, speaking to the Scout Warrior and the National Interest for a story published in January 2017. The future congressman and defense contractor said he expected a 100 year war.